Prof. Dr. med. Bahram Mohammadi is Director of the Department of Neurology at the INI – International Neuroscience Institute® in Hanover. Prof. Mohammadi studied human medicine at the Hannover Medical School (MHH). From 1999 to 2005 he completed his training as a neurologist in the Department of Neurology of the MHH (Director: Prof. Dr. R. Dengler) and in 2005 became a specialist in neurology, working until until 2006 in the neurology department of MHH as a specialist in electrophysiology and neurodegeneration.  From 2006 to 2010 he worked clinically as Senior Physician at the INI – International Neuroscience Institute® Hannover and in 2010 he moved to the Department of Neurology of the University Medical Center Schleswig-Holstein, Campus Lübeck (Director: Prof. Dr. T. F. Münte). Since 2011 he is director of the Department of Neurology at INI Hannover. In 2000 he was appointed Doctor of Medicine by the Faculty of Medicine of the MHH. The subject of his dissertation was the “Paramyotonia Congenita: Electrophysiological basis of cold sensitivity of the symptoms acquired using the patch-clamp technique.” After further scientific work with the focus on “Experimental Studies on the Physiology and Pharmacology of Inhibitory Ligand-Activated Ion Channels” in 2006 he was awarded the Venia Legendi Award by the Neurology Faculty of MHH.

From 2006 to 2010 he was a fellow of the German Research Foundation (DFG) in the field of clinical neuroscience. During this time, he co-founded a new functional imaging research group in neurology, psychiatry and psychology at INI. In 2011 he was appointed professor (APL). The CNS-LAB in the INI under his leadership initiated various national and international cooperations. Clinically, he uses functional imaging for preoperative diagnosis and brain mapping in neurosurgical patients.

Special fields of work and research: 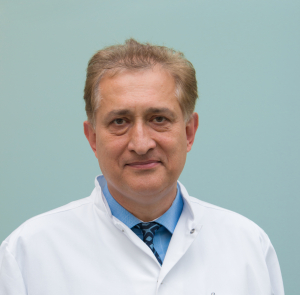