The emphasis is on the selection of patients for the new operative indication field Restorative Neurosurgery in cooperation with the epileptologist Professor Stefan. The aim is the removal of pathological tissue areas that lead to malfunction:

1. Epileptic foci leading to frequent seizures which are not controllable via medication.

Prof. Hans-Joachim Freund represents this new specialty at the interface of neurology and neurosurgery. It includes the indication for special neurosurgical interventions including deep stimulation and preoperative diagnostics with a focus on functional resonance tomography. After studying in Hamburg and Freiburg, Prof. Freund completed his training in neurology and neurophysiology at the clinic of Prof. Jung at the University of Freiburg. From 1974-75 he was Visiting Professor at the University Institute of Neurology, National Hospital, Queen Square, London, and 1984 Visiting Scientist at Dep. of Neurophysiology at the NIH in Bethesda / Maryland.
From 1977 to 2001 he was Professor of Neurology and Director of the Department of Neurology at the University of Dusseldorf. He turned down offers from Freiburg and Hamburg. Prof. Freund was a member of the Senate from 1978-1984 and Vice President of the German Research Foundation from 1990-1993 and Chairman of the Senate Commission for Clinical Research of the DFG and a member of the Executive Board of the German Society for Naturalists and Physicians.

From 1991 to 1999 Prof. Freund was chairman of the German Stroke Foundation and 1982-1990 spokesman of the special research area 200: Pathological Mechanisms of Brain Function and from 1991-2001 spokesman of the subsequent Collaborative Research Center 194: Structural Change and Dysfunction in the Nervous System. These topics were then also the basis of his interest in working closely with leading neurosurgeons. In 1994, the close collaboration with Prof. Volker Sturm began on the then new field of deep stimulation of the brain, which became the German focal point in the cooperation of the Dusseldorf and Cologne clinics. From 2002, he was appointed to the world’s leading neurosurgical center in Hanover, the newly founded INI, where he built the Department of Neurological and Neurosurgical Neurology. These include function-improving interventions in structural lesions such as migration disorders, i.e. local malformations, or  scar lesions.

Prof. Freund is a member of several academies:

He was a member of various editorial boards:

In 1995, he was awarded the 1st Class of the Order of Merit of the Federal Republic of Germany. In 2002 the University of Zurich awarded him with an honorary doctorate. In 1993 Prof. Freund received the Carmichael Medal London, in 1994 the Berger Prize of the German Society for Clinical Neurophysiology and Functional Imaging, in 1995 the Laufberger Medal of the Czech Physiological Society, in 2000 the Robert Pfleger Prize together with Thomas Brandt and Johannes Dichgans and in 2001 he was awarded the Wilhelm Erb Gedenk Münze der Deutschen  Neurological Society.

His main fields of work are:

Prof. Freund is married and has three adult sons. 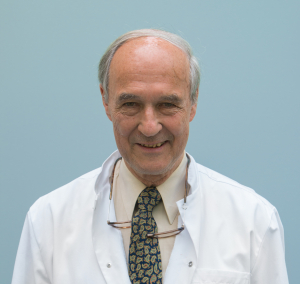